Once again, we are awash in delightful events in our little city. Let the following list of Great Gables Events be your life buoy against the high tide of fabulous cultural immersion in the coming days.

We don’t want you to miss a thing. Have a look at the list and set aside some quality time in your busy life for family and friends.

Miracle Mile is Back To Beautiful

Celebrate the re-design of the fabulous new Miracle Mile, now a modern pedestrian wonderland with outstanding modern amenities, wide sidewalks, generous lighting and artistic details, on Saturday starting at 5:30pm for the ribbon cutting at the SE corner of Miracle Mile and Le Jeune Road. https://gablesguide.com/event/miracle-mile-back-to-beautiful/

Celebrate the Spring season with local foods and the gorgeous gardens they grow in at Fairchild Tropical Botanic Garden this weekend. Learn tips to keep your garden thriving during the summer months, pick up a trick from local chefs, enjoy locally crafted beer, and spirits, much more. https://gablesguide.com/event/fairchild-spring-garden-festival/2018-04-14/

This 2016 Pulitzer Prize for Drama Finalist takes place in the offices of a notorious Manhattan magazine. A group of ruthless editorial assistants vie for their bosses’ jobs and a book deal before they’re thirty. This sharp-witted play brilliantly questions the dark side of artistic ambition, modern workplace trauma and the striking commonality of exploitation as a commercial enterprise in popular culture. GableStage is located at the Biltmore Hotel, 1200 Anastasia Ave. Call 305-445-1119. http://www.gablestage.org

The Pirates of Penzance at Ring Theatre

Prepare to set sail off the coast of Cornwall with the swashbuckling Pirates of Penzance at University of MIami’s Jerry Herman Ring Theatre. Frederic has earned his dues as the pirates’ apprentice waiting to be promoted to full pirate-dom on his 21st birthday, but upon discovery that he is a leap year baby born on February 29th, it seems he may never get the chance. One of Gilbert and Sullivan’s most famous works, gets a fresh interpretation on the Ring stage. Call 305-284-3355. http://www.as.miami.edu/ringtheatre/current-season/

First released in 1961, Disney’s Classic 101 Dalamatians is a timeless classic that’s appropriate for young children. This British-American animated adventure comedy-drama was based on the novel by Dodie Smith. Brought to you by Miami Children’s Theater, the film is one hour long. https://gablesguide.com/event/kids-disneys-101-dalmatians-at-youth-center/2018-04-13/

Isle of Dogs at Gables Cinema

Isle of Dogs (I love dogs?) tells the story of Atari Kobayashi, the 12-year-old ward of corrupt Mayor Kobayashi. When an executive decree exiles all the canine pets of Megasaki City to a vast garbage-dump, Atari sets off alone in a miniature Junior-Turbo Prop and flies to Trash Island in search of his bodyguard-dog, Spots. Coral Gables Art Cinema is located at 260 Aragon. Call 786-385-9689 or visit the web site for details. http://www.gablescinema.org

Landfill Harmonic and Racing Extinction are two wonderful films coming to Gables Cinema during Earth Week in Coral Gables dealing with the themes of landfills and species extinctions. Check out the listings below for details. Coral Gables Art Cinema is located at 260 Aragon. Call 786-385-9689 or visit the web site for details. http://www.gablescinema.org 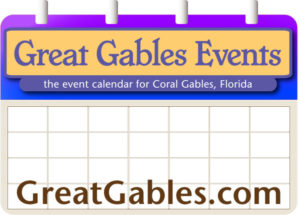